Get the story behind the image! An insight with Photographer Simon Roberts.

“This photograph was taken in the city of Pyatigorsk in the Caucasus’ during my year’s journey across Russia between 2004-2005 when I was making work for my book, Motherland. Pyatigorsk sits at the foot of Mount Mashuk and was made famous by the Russian poet Mikhail Lermontov who, in an echo of the plot from his novel A Hero of Our Time, was killed here in a duel in 1841. It’s also on the doorstep of Igushetia and Chechnya, two regions that have predominantly been depicted as places of conflict.

I was keen to look at the other side of the Caucasus, not just seen as a place of disintegration, war and decay. Traditionally, the region has been a popular spa destination. The curative powers of the Caucasus freshwater springs were first noticed in the late 18th century and Russians have been visiting this spa region ever since, staying in the many sanatoria and benefiting from a range of treatments to aid disorders of the muscles, bones, heart, skin and nervous system.

In this photograph, taken in the town’s meat market, we have this anonymous Russian women standing in front of slabs of meat holding a cleaver in one hand. There’s something other-wordly about her, dignified, beautiful. She seems completely at ease with herself and the seemingly masculine environment. I love the details of the colour red in the photograph, from the luscious meats, to her hair, lipstick and the red frames in the ceiling roof.

For me this image, taken in split second before the women turned to the camera, encapsulates modern Russia and the essence of the Russian concept of rodina, or ‘motherland’. Rodina is the place where one is born – a familiar place which has always been there, a place where one feels a sense of belonging. Moreover, it is identified with the nation’s soul.”- Simon Roberts 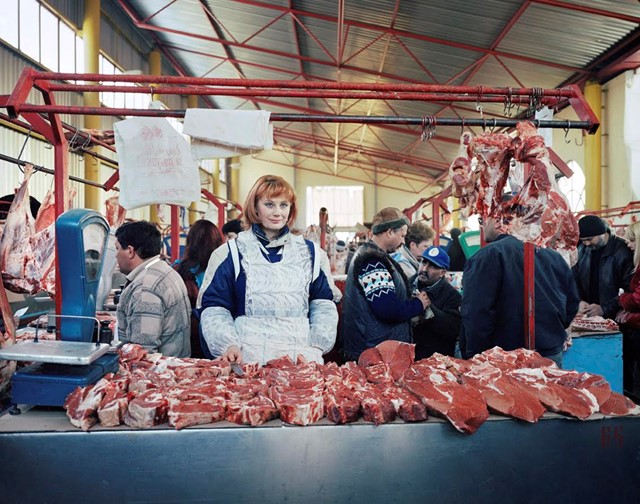